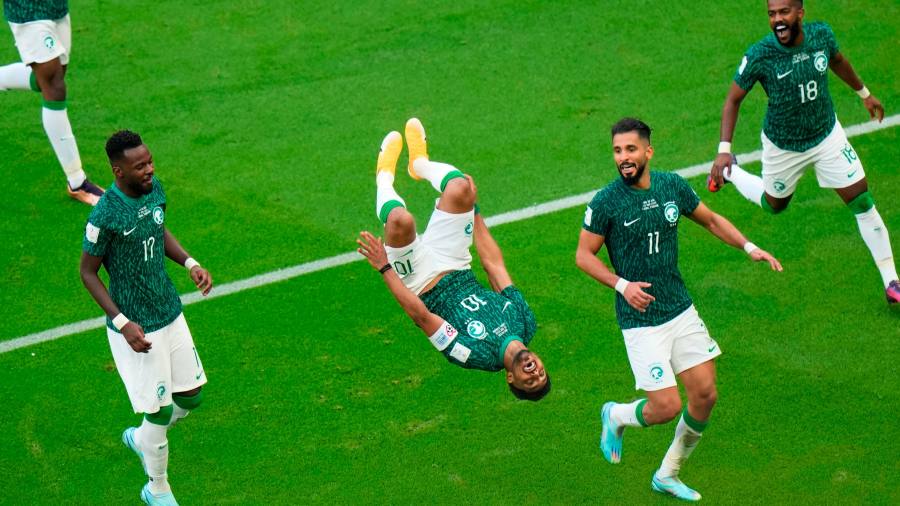 It wasn’t until the third day of the World Cup in Qatar that the first real topic of discussion emerged – at least when it comes to football. Argentina, the tournament’s second favorites, suffered a humiliating defeat to Saudi Arabia, one of the lowest-ranked teams.

“We expected to lose three or four to nil,” said Thamer Jamal, 35, a Saudi chemist who crossed the border with his brother to watch the game in Doha. “These last few minutes” – with the Saudis leading precariously 2-1 – “I’ve never been so stressed in my life.”

Unable to secure tickets for Tuesday’s game, the pair headed to the official FIFA fan festival held on a patch of open tarmac between the Doha coast and the West Bay skyscrapers. Several thousand spectators gathered for the lunchtime kick-off – including Asian migrant workers wearing blue and white Argentinian replica T-shirts emblazoned with star Lionel Messi’s name. They would leave disappointed.

The festival is intended to be a focal point for those visiting Qatar but not attending matches – and a chance to address pre-tournament complaints that this World Cup, held in a country without football traditions, would lack atmosphere.

The open hall, which has a capacity of 40,000 people, combines game shows with music performances and food stalls. During the opening game, the festival drew such a crowd that the police were sent to help maintain control.

But not everyone was impressed with what Qatar has to offer visitors. “I’ve been to a lot of fan events and it’s pretty quiet here,” said Robert Kennedy, 58, a US marketing director who has attended six of the last seven World Cups. “We went to the Amazon in Brazil and to a game reserve in South Africa,” he recalls. “It’s early days, but it’s not the same.”

The atmosphere was one of the main concerns ahead of the tournament, with many worried that the high prices, limited public space, and lack of alcohol would also dilute the carnival atmosphere of a traditional World Cup.

Surprisingly, football vibes can be found in Doha’s gleaming new subway system, where fans from all 32 countries can exchange stories as they travel to and from matches. Unlike all previous World Cups, each match in Qatar 2022 takes place in the vicinity of one city – Doha – amassing a fan base that usually extends thousands of kilometers.

The last-minute decision by the organizers to ban the sale of beer in the fan zones outside the stadiums – announced 48 hours before Sunday’s opening match – further limited the already limited access to alcohol. Fans can still buy beer at the fan festival, but only after 7pm and at a few other locations in the city, such as five-star hotels. 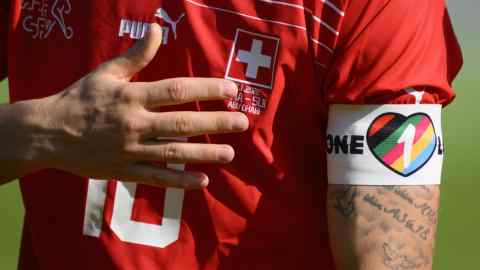 There were some high-profile early logistical problems. The digital ticketing system ran into problems ahead of England’s opening match against Iran, resulting in thousands of ticket holders missing the match. The problems repeated themselves later on Monday when Wales faced the US. FIFA said it was “working to resolve the issue” and advised fans to seek support outside the match facilities.

Some Welsh fans also complained after security guards demanded the removal of rainbow hats, a reminder of the sensitivity around LGBT rights in Qatar. Former Wales captain Laura McAllister said she was told to take off her rainbow hat because it was a “forbidden symbol”. She said ITV News“They insisted that if we didn’t take it off, we wouldn’t be allowed into the stadium.”

Earlier in the day, a number of European teams were forced to scrap their plans to wear rainbow-themed armbands during their opening games after FIFA threatened to punish the players.

Ashley Brown, from the Football Supporters Association, which represents England and Wales supporters at the tournament, said the first few days had been “generally positive”. Most fans “settled in quite well”, transportation worked well, and accommodation was generally of a standard.

He said the ticketing issues were worrisome but should be resolved once the technical issues were resolved. The thing that may not improve is the overall vibe of the tournament.

“Fans are finding places to go for a drink and enjoy watching the games,” Brown said. “But the atmosphere is lacking. We don’t have that street exuberance you usually have at a tournament – I think it will be missed here.”

The atmosphere in the stadiums was also mixed. The opening match between hosts Qatar and Ecuador kicked off with a packed crowd at al-Bayt Stadium, a new facility in the middle of the desert that looks like a tent and can seat around 60,000 spectators. But after the break, the crowd of mainly Qataris – men dressed in traditional white robes, women in black – began to disappear, and the hosts were losing 2-0. With 10 minutes left, the stands were almost empty.

The official attendance for Senegal’s match against the Netherlands at al-Thumama Stadium on Monday was just under 42,000 – close to 44,400 seats. But TV viewers could see that the rows of seats remained empty.

“I’m not sure what I was expecting,” says Ryan Harry, a 26-year-old Wales fan. “The atmosphere was good to be fair.”

He and three friends flew to Qatar to watch Wales’ first World Cup appearance since 1958, but would otherwise follow football from the Rose & Thistle Pub at the Horizon Manor Hotel in Doha. “We had no problems with alcohol – we found plenty of places.”

Lewis Mitchell, a 28-year-old Wales supporter, said Qatar may be different from previous World Cups but they still enjoyed themselves. “Instead of being in the market, you are in a pub on the second floor of a hotel,” he said.