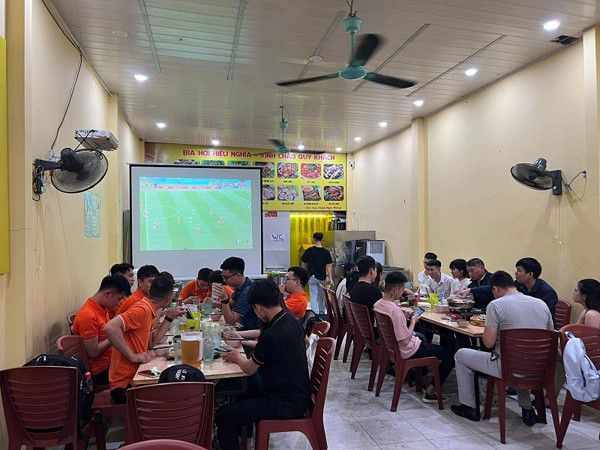 Every four years, the people of Hanoi relive with their friends and family the excitement of the players during the world’s biggest football celebration, the World Cup.

Vietnamese fans are known for their crazy love for this sport. Sleepless nights are not a problem as long as people can watch matches live.

The most popular sport in the country has one benefit: it brings people together to watch it.

In the 24 years since the 1998 FIFA World Cup hosted by France, Hoang Xuan Quang, a 34-year-old resident of Kham Thien Street in Hanoi’s Dong Da district, has never missed a World Cup tournament.

Like many fans around the world, Quang loves watching Brazilian footballers on the pitch. “The first match I watched was the opening match of the 1998 World Cup between Brazil and Scotland,” he told The Hanoi Times.

“I was watching the match with my father and younger brother. We all fell in love with Brazilian stars, just like everyone else,” he said.

To date, Quang is still a fan of Brazil. “I was shocked that my dream team lost to Germany by six goals in the semi-final round of the 2014 World Cup,” he said.

“This is my worst gaming memory.”

Tran Van Toan, a resident of Chuong Duong Municipality in Thuong Tin District, recalls the old days when his family had the only black and white TV in the area.

“At night, people would come and gather at my house, waiting together for the game to start,” he said.

“A lot of people came. We all loved football even though we didn’t spell the players’ names correctly.”

“Sometimes our shouts were too loud and woke others up. But that was okay because everyone knew that the World Cup only happens once every four years.

Some adults still remember what it felt like when friends got together to watch football.

“Some drinks and snacks are a must when we watch the World Cup, when we go to a cafe or restaurant as a group,” said Ta Thanh Tung of Hai Ba Trung District.

“The Games were at midnight, so sometimes we would start going home at 4-5 in the morning,” said Tung. “We were all asleep.”

Manh Quan, the owner of a restaurant on Doc Ngu Street in the Ba Dinh district, said he had received many bookings for the match between England and Iran.

“Most people want us to put their tables in the middle of the restaurant and close to the screen. Hopefully more customers will come to enjoy the games and our food.”

For everyone, the 2022 World Cup, hosted by Qatar, could be Cristiano Ronaldo and Lionel Messi’s last appearance for the national team in an international tournament.

“It’s a great time when Ronaldo and Messi are competing with each other on every inch of the pitch,” said Quang.

Both players have reached the final stage of their careers. They will shine for the last time for their nations, he added.

“So I wouldn’t want to see them play alone.”

Northern Ireland’s Peter Cowan recalled having to wear a soccer jersey to classes to support the 2002 World Cup in Japan and South Korea. The stadium is by far the best place to watch football, said Peter.

“Going to bars and restaurants to watch is fun too,” he said. “But it’s hard to do that every time we still have to work the next day.”

Peter said he has been working in Vietnam since 2015 and had the opportunity to enjoy the air during the 2018 World Cup in Russia.

“The bars I went to had a great atmosphere. The Vietnamese are extremely die-hard football fans,” said Peter, referring to the fact that the local population is ready to stay up until 4am for a football match.

Technological advancements have made it easier for people to watch the World Cup using portable electronic devices and pre-paid apps, especially with the 2022 World Cup in December, which is a remarkable time to watch.

Normally, the World Cup, as well as other international competitions such as the UEFA European Championship and CONMEBOL Copa America, often take place in June-July after the end of the club season, Pham Duc Quan, a 33-year-old civil servant, told The Hanoi Times.

“On the contrary, the 2022 World Cup in Qatar takes place in December and it is difficult for Vietnamese fans to follow the tournament,” he said.

“People have a lot of work to do at the end of the year, while students can’t miss classes just because they overslept after watching the games the night before,” said Quan.

He said he would consider watching matches on his smartphone at home rather than going out and joining late parties with friends.

For some people working the night shift, a smartphone is the only way to catch up on the tournament.

He told The Hanoi Times that he was watching the game on his smartphone. “It’s impossible to watch the whole match because I would have to deliver orders soon.”