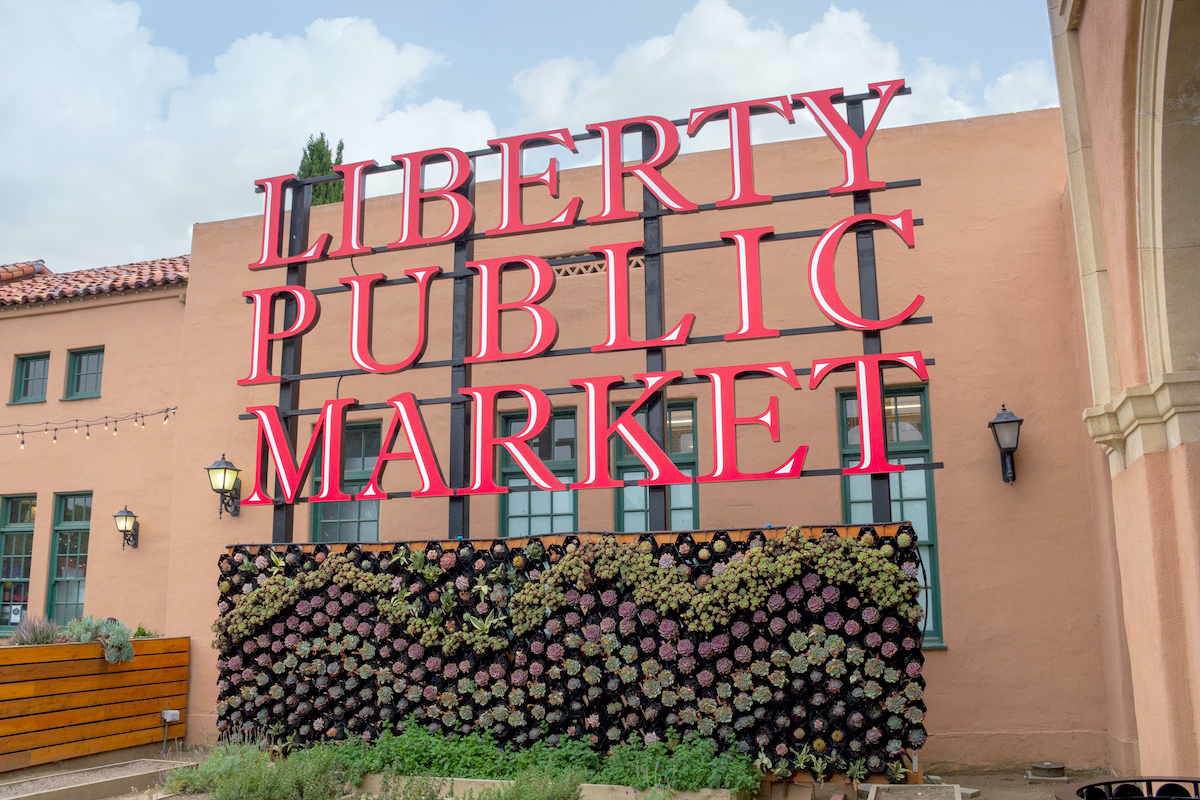 There is no other place like it: a historic landmark turned into a rich and rewarding experience for the whole family – and in a city blessed with great weather all year round. Liberty Station was built from the buildings and grounds of the Naval Training Center (NTC) in San Diego, California. Of the original 300 buildings, 64 make up the station; all but 10 were restored and repurposed. From its inception in 1923 until its closure in 1998, the NTC turned two million recruits into naval personnel who continued to serve their country.

One of the sailors trained here was my cousin, an electrician who worked on many “secret” nuclear submarines. All of these ships are commemorated by two rows of black blocks lining each side of the Naval Training Center Park bordering Liberty Station. Large naval guns ahead. NTC Park is now a place for family sports, walks and just watching planes take off from the nearby San Diego International Airport.

The ship, on which all military personnel underwent rigorous training, is affectionately called Recruit, the ship that never sailed. It stands as a proud memorial near NTC Park. At the north end of Liberty Station is gate number one, the only gate left open after curfew and now off-limits to pedestrians. On both sides, former prison cells are attached to it. As you enter the gate, you will see a large anchor, the base of the Liberty Station logo, surrounded by flowering bushes on a vast green lawn.

At its peak, there were 40,000 troops who dined at what is now the Liberty Public Market. It has been repurposed as a trendy canteen with 22 food stalls serving a variety of cuisines. Almost everything is left almost in its original form. In fact, in the section called the Dining Room, where there are bars to grab a bite to eat, there are still murals painted on the upper walls by artists and naval recruits. There are also local craft, clothing and jewelry vendors.

The old central buildings are located in two rows, between which there were once parade grounds, landscaped as spacious spaces for family celebrations. There are three sections: North, Central and South. Sidewalks are provided around manicured lawns.

The North Promenade has an 88-foot pine tree that dazzles with bright lights during the Christmas season, starting the Friday after Thanksgiving.

There is an old white church on the South Promenade, where many servicemen got married and their children were baptized. Behind the Dick Laub NTC command center is the Central Quay. It has a reflecting pool, a rose garden with a great history, and three outstanding art installations: Facetime, Tessselation, and Dime to Call Home. Between the Central and South Promenades, there is a mural “Hello” for a photo as a keepsake on Instagram.

The Arts District on historic Decatur Street, the main artery of Liberty Station, is home to art galleries, studios, art venues, art societies, and museums where families can entertain or host events. There are three museums in the same building: the San Diego Watercolor Society, which hosts workshops and exhibitions in the field, the New Visions Museum for quilt and textile artists, and the New Americans Museum, dedicated to the experiences of people like I am an immigrant to this country. promised land. And you’ll love Hugo Crosthwaite’s murals decorating the covered walkway from Liberty Public Market to Barracks 41. In most buildings, these walkways face the waterfront, and a variety of artists’ chairs provide occasional seating.

Entertainment options include The Lot, formerly Luce Auditorium, where recruits enjoyed concerts, comedy and more. Now there are six cinemas with the latest movies and a bar/lounge in front of the entrance.

Throughout the year, Freedom Station hosts special events. Two popular examples are “Oktoberfest” and “Halloween at the train station” in the fall. The annual “Cheer of the Season” also includes the lighting of the Christmas Tree, the lighting of the Hannukah Menorah and the Nutcracker Tea. Last summer, the Arts District hosted an outdoor summer music series. Individual vendors and businesses also sponsor their own events. There is a calendar of events so you don’t miss anything. Next year, the centenary of Freedom Station will be celebrated throughout the year.

For me, the best entertainment option is shopping. Since local businesses are preferred, the shops offer a very interesting variety. I started at the stalls in the Liberty Public Market and ended up at the Sea Hive, where there are about 30 retailers. There are 21 other stores, but I spent a lot of time at Pigment.

Pigment is a specialty plant and garden store. Was looking for suitable options for several home projects at Home Depot or Lowe’s Nurseries. In this wonderful store, I found many interesting opportunities. There is a beautiful plant with yellow stems (my favorite color, the lady said there is also a red variety). The store has separate sections, each dedicated to a pigment color such as pink, salmon, or yellow. I liked the neon section because I have been looking for neon plants to decorate my living room for a long time. Another section had various hanging cacti for my gazebo.

After walking the boardwalks and the arts district, my husband and I had lunch at the chic Solare Restaurant on Historic Decatur Road. An excellent sausage board was accompanied by red wines for cocktails, followed by divine dishes of swordfish and sea bass. We finished our coffee and chamomile tea, skipping the sinful dessert.

The next day we had lunch at The Presley, a new addition to over 50 restaurants, cafes and food vendors around Liberty Station. I liked the atmosphere, especially the romantic almost bohemian corners around the spacious gardens outside.

Kids will love Mini Donut Place. But it was at Moniker General that my husband stayed. We really liked the corner called “Together is better”.

He would have also liked The Stone Brewery, a craft beer maker and the largest eatery in Liberty Station, but it was closed for renovations. His brewing stations were visible from large shop windows.

Liberty Station already has many resources for a rich and rewarding family vacation. But if you have more than a weekend to spare, or if you like to spend your days with activities, there are other great places to explore in Old Town San Diego, just 10 minutes away; Downtown San Diego with Balboa Park, San Diego Zoo, Seaport Village, Sea World, Gaslamp District and more is just 5 minutes’ walk away.

The same can be said for the Cabrillo National Monument at Point Loma, dedicated to 16th-century explorer Juan Rodríguez Cabrillo, and the Old Point Loma Lighthouse, built in 1854. The two-mile Bayside Trail offers breathtaking views of San Diego Bay and the Coastal Tidepool Trail leads to the unique ecosystem of Southern California.

The Women’s Museum of California, formerly part of Liberty Station, is just 15 minutes’ drive away. The Education Center at the Jacobs Center in Euclid hosts interactive workshops on the history of women who brought about needed social change through grassroots activism. I especially liked the delicate pink flowers cascading from the roofline.

And just 5 minutes away, La Jolla, including The Cove, Scripps Park and Children’s Pool, spans the coastline on a steep slope from downtown restaurants and shops. Part of the La Jolla Underwater Park and Ecological Reserve, home to a variety of wildlife, including the popular seal colony. Activities include snorkeling, open water swimming, scuba diving, kayaking, kayaking, biking and coastal walks.

And just as we thought we’d seen it all, the glider port at Torrey Pines caught our attention. Svoboda Station is a great place for a rich and rewarding family holiday.

To learn more about San Diego, check out these articles: